You like a beer with character? Then you should definitely pay a visit to our specialty brewery in Esen. At De Dolle Brouwers we brew beers with a long history in a traditional way.

Our first beer was the so-called Oerbier in 1980. And that after the takeover of an empty brewery in Esen near Diksmuide. This beer came after we first experimented at home in the washtub, with only natural ingredients and with secondary fermentation in the bottle. Since 1980 we have been able to systematically expand our range with delicious brews such as arabier, Boskeun, Dulle Teve, Stille Nacht, Stout and Reserva. Production is stable around 1200 hectolitres per year.

Come along for a visit We like to have visitors. That's why we organise a brewery visit every Sunday for individual gourmets or small groups. Larger groups are requested to make a reservation. Don't forget your mouth mask!

From cycling club to brewery

By the way, the name De Dolle Brouwers comes from a bicycle club 'De Dolle Dravers' that consisted of a maximum of 4 members. These were the two brothers Herteleer, Dirk Coussée and Bernard Veranneman. The clubhouse was a little house which used to be a pigeon loft, later a washhouse. The cyclists not only had a ready knowledge of distances and slopes, but also of the regional beer culture: De Dolle Brouwers was born.

We are located in Esen, a district of Diksmuide with a rich history. Around the turn of the century the village had 6 breweries and two distilleries, which mainly worked part-time. The history of the brewery goes back to 1835 when doctor Louis Nevejan founded the brewery, later with distillery.

On our website you will discover who the different distributors are for the beers of our brewery De Dolle Brouwers in Esen. Do you still have certain questions about our beers? Then contact us today. Through the list of distributors you know where you can buy our beers. 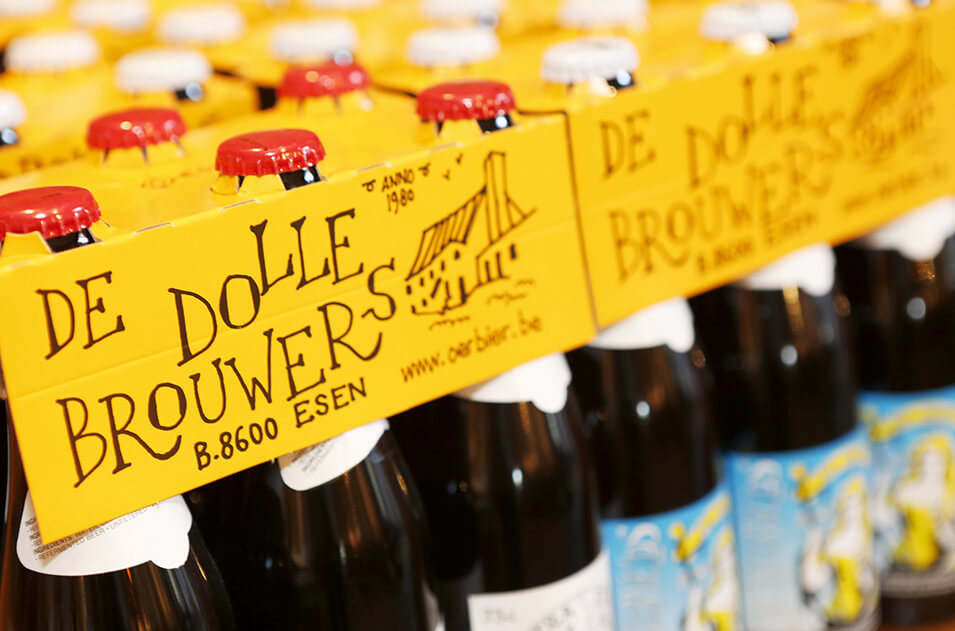 If you are attracted to beer with character, then you should definitely visit our Speciality Brewery in Esen for traditionally brewed beers with a long history.

Visit our brewery by appointment for groups of minimum 30 people, smaller groups and individual visitors are welcome on Sunday afternoon at 3 pm.

T-shirts are for sale in the Oerbar on Saturday and Sunday, but from now on we also sell these beautiful T-shirts and jerseys on order: be quick.

If you refuse cookies, your information will not be tracked when you visit this site. Only one cookie will be used in your browser to remember your preference not to be tracked.